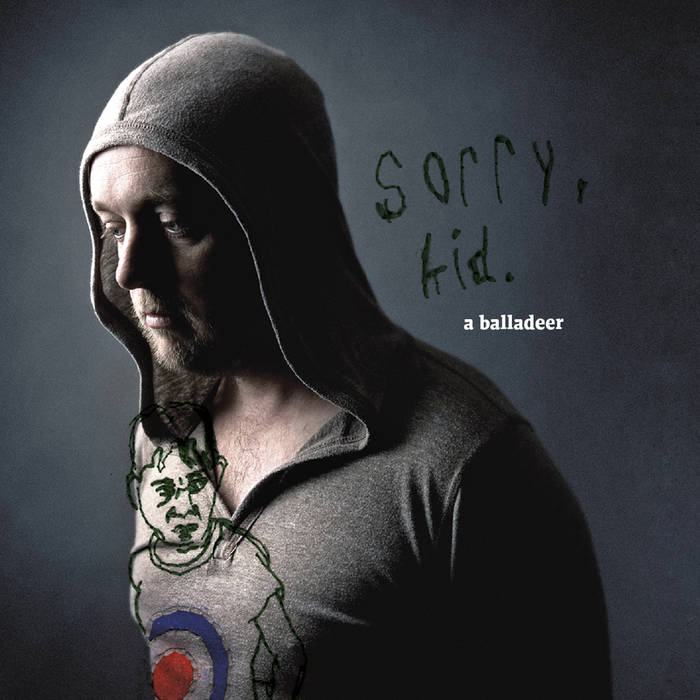 Sorry, kid. is the singer/songwriter album he always wanted to make, but never dared to. Marinus de Goederen (hü-deren), aka a balladeer, sums up his latest album up in one sentence. For the follow-up to the critically acclaimed Where Are You, Bambi Woods? (2010) he finally followed in the footsteps of his heroes Bruce Springsteen, Tori Amos, Damien Rice and Joni Mitchell. All singer/songwriters with their heart on their sleeves. “They have taught me to be as honest as possible.”

“I never had a soul mate. That’s why I don’t fit in.” The first lines of ‘Why Hitler Loved His Dog’ are a slap in the face and represents one of the album’s darker songs. ‘A Little Rain Has Never Hurt No One’ sounds like an evergreen, a song that’s always been around, while ‘One Sunday’ can be labelled a murder ballad. ‘How I Hurt My Heels’ tells the story of a swing set accident.

As usual, De Goederen wrote the album all by himself, but for the first time he added a new title to his contribution, that of co-producer. He asked Martin Wenk (Calexico) and Martijn van Agt (Anouk) to play on the album and was also very pleased to work with the clarinetist and the string quartet of Holland’s number one orchestra: The Metropole Orchestra. De Goederen: “They cost me a fortune, but they were worth every penny of it!” After having begged his record company EMI Music to make an album distinct from his prior two, De Goederen financed the new album himself. “I didn’t want to make any compromises as I would have if Sorry, kid. was released on a major label.”

The second, bonus disc is a compilation of the two singles a balladeer released in The Netherlands and includes three extra songs, a few remixes plus ‘And So Is Love’, a cover song by Kate Bush.

a balladeer’s second album Where Are You Bambi Woods? (ZIP065 in the US) entered the Dutch Album Chart at #16 and was nominated for a Dutch Grammy award. Having played at Holland’s biggest outdoor festival (Lowlands), a balladeer has also opened for such notable artists as Keane, Live, Beth Hart, Jay Brannan, etc.

Perhaps of most interest, on the Holland’s Next Top Model TV show, the music of a balladeer is heard each time a “Top Model” becomes teary eyed—a common occurrence!

Marinus de Goederen will be making appearances in the US this summer (west coast and New York) and radio promotion for the focus track ‘A Little Rain Has Never Hurt No One’ will begin in the middle of June.

except for 'And So Is Love'
written by Kate Bush
published by Kate Bush Music Ltd.
© and ℗ 1993 Novercia Ltd.

a balladeer Amsterdam, The Netherlands

Dutch singer/songwriter best known for the hit 'Swim with Sam'. In 2009 a balladeer's sophomore album 'Where Are You, Bambi Woods?' was nominated for a Dutch Grammy. In the past a balladeer has been the support of Keane, Live, Saybia, Jay Brannan, Beth Hart, Gabriel Rios, The Feeling and Tom McRae. ... more

Track Name: Mars
so it's not in the stars
or in the shape of the moon
but we are both from Mars
and before you know it

cause I don't feel alright
Track Name: Why Hitler Loved His Dog
I never had a soul mate

that's why I want a woman
that's why I favor men
that's why I got called 'faggot'
that's why I need a friend
Track Name: A Little Rain Has Never Hurt No One
all the clouds have silver linings
and don't block the sun too long
there's a saying that
a little rain never hurt no one

save your drama for your mama
mine says: "learn to rise above"
men who fear get hit as well
but I'm too scared of love

what doesn't kill you makes you stronger
father says: "the best defense is a good offence"
so pacifists like me don't stand a chance

I don’t laugh just as much since my heart got broken
Track Name: What The World Needs Now Is A Killer Storm
let the sun go down unnoticed
let the clouds prepare to pour
let a pebble hail take over
let the water flow ashore

make the wind go shake the houses
where it’s cozy, nice and warm
hurt the elder’s ears with thunder
scare the orphans in the dorms

make the only few survivors
gaze at rainbows galore
when they’re crying out to Jesus
hand the land back to their Lord
Track Name: Noah
the rain pours down in sheets
and the sky is gray
the sun just won’t come out
and it’s been like this for days

no one cared to hark

well, if Noah had been here
I would kick him in the shin
cause if Noah had been here
he just would not let me in
Track Name: One Sunday
and you wake me on a Sunday
and you sit me up in bed
and you talk in only whispers
and you praise the day ahead
and you throw me your old sweater
and you get me in my pants
and you help me tie a shoelace when you tell me of your plan

and you take me from the harbor in your arms and in your hands
and you lead me through the market
and you pass the bonbon stand
and you put me on the subway
and you hold my head up high
and you smile at dressy Christians while their kids play in the aisle
and you tip the morning desk clerk
and you lay me back in bed
and you say I’m more than welcome
and you leave me there more alive than dead
Track Name: How I Hurt My Heels
mother was not that alert
and I did not try to pull at her skirt
that day when on the swing set

I hurt my heels

I hurt my heels
Track Name: More Or Less The Sort Of Shit Ex-Lovers Get Restraining Orders For
hi - hi, it's me again
second time today
but this time with a plan

so go get dressed

I - I respect your choice
yes, I read you
there's no need to raise your voice

to hell with these patterns and all those parallels
how come no one wants to know me all that well?

well, I'll be off

but I'll be back
Track Name: Eleven
I miss the little boy I was
with shiny hair and starry eyes
and an oh so much stronger heart
and my mother's love

then eleven
Track Name: When A  Law’s Been Broken (Timo Rozendal remix)
remixed an

Bandcamp Daily  your guide to the world of Bandcamp